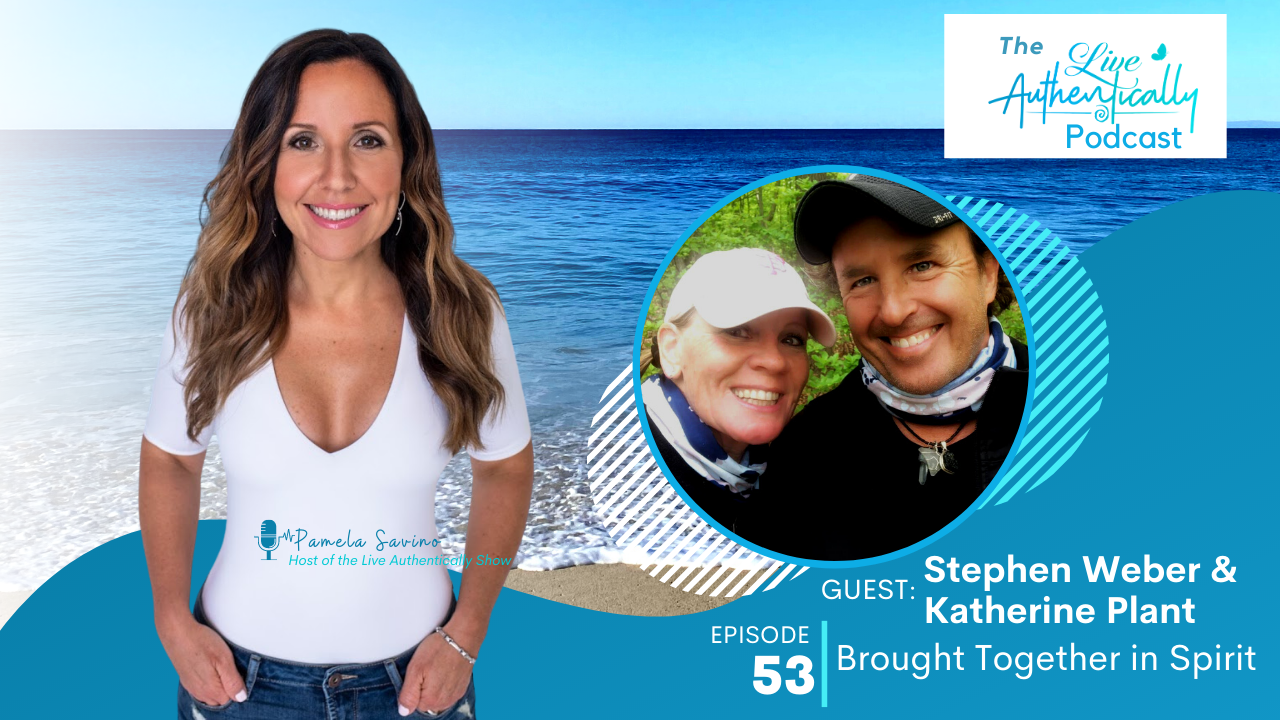 While today’s guests, Steven Weber and Katherine Plant, are known for their crystal and Reiki healing practices, today’s episode became a deep dive into their story of near-death experiences, spiritual connection and finding the place between here and there.

What is the place between here and there? It’s more than just the title of Steve and Kathie’s amazing book. Years ago, Steve was in a devastating motorcycle accident. He was in a coma for three weeks while his body fought to heal from his injuries. On the outside, Steve was laying in an ICU hospital bed. Spiritually, he was somewhere completely different.

In his mind, he didn’t feel like he was dreaming or dead but just existing normally. He began to see people he recognized, even those he had never met in life. Eventually, he came to the realization that everyone is connected in spirit. In his words, the creator and the creation are one and the same.

During his time in the place between here and there, he saw his life in review, shedding any hateful feelings he had toward people. He prepared new spirits for their first earthly incarnation. He saw old friends who had died recently and learned that they were his spiritual guides. He also saw a woman every day who was praying, and he couldn’t figure out why, until later.

After three weeks, Steve woke up and began a long rehabilitation journey. During this time, he realized that the woman praying for him in the place between here and there was his friend, Kathie. She prayed for Steve every day while he was in the hospital. Since his accident, Kathie has been by his side physically and in spirit.

While Steve was delighted to have these experiences, he lost touch with his spiritual side when his young son Nick passed away from an overdose. He was overwhelmed with grief. Kathie decided to find a way to help. She made a shrine with a statue of St. Teresa for people to leave notes as a way of remembering Nick.

Suddenly, Steve and Kathie started seeing roses everywhere they went. On a trail, in a park or on a bench. Kathie theorized that it was Steve’s son trying to reach out in spirit. Steve didn’t believe it at first. Kathie’s suspicions were validated when a mutual friend went to a psychic. She was able to communicate with Steve’s son, who said he had a synchronicity with St. Teresa and was leaving roses behind for his dad.

They learned that Nick had the same birthday as St. Teresa, and her canonization day was the same as his death date. Steve was blown away, and started connecting to the spiritual world again.

Steve and Kathie took their experience and wrote the incredible book “The Place Between Here and There” which is now available on Amazon and through their website. In addition to being authors, Steve and Kathie also work as Reiki sound and crystal healing practitioners. They are available and ready to help anyone connect with the spiritual world. Contact them at their email: [email protected]