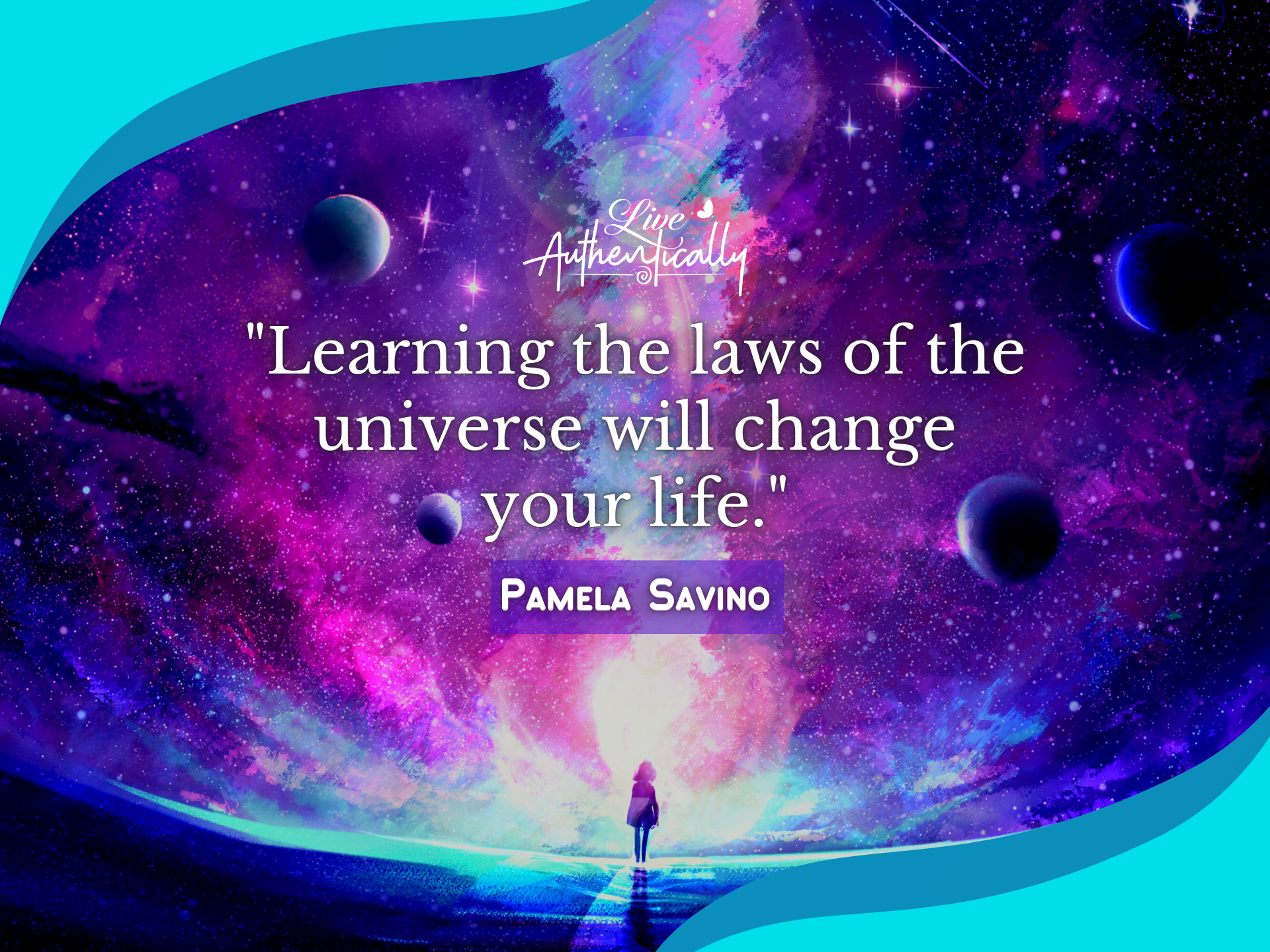 In addition to educating you on these foundational laws, I’m going to show you how you can incorporate them into your life.  Knowledge is valuable, but if we don’t implement it into our lives, we don’t get to enjoy the value of it.

This week, I’m going to tee up the topic and give you an overview of what’s to come over the next few weeks. I’ll also give you spiritually aligned action items that you can do this week to start to open yourself up to understanding the laws of the universe.

Here are the 12 universal laws that are the foundation of the universe.

Over the next few weeks, we will be taking a deep dive into each of the laws, and I will show you how you can apply them to your life.  But first, I’m going to share my personal story.

I’m sharing it with you to show that initially, I was a naysayer.  My knee-jerk reaction was that learning about energy was counter to what I believed.  Nonetheless, I approached the topic with an open mind, and that started the tsunami of personal growth and transformation.

We can never underestimate the power of planting a seed. So I am planting the seed today and allowing you to take in whatever you’re ready for at this time.

Everything is Energy – My Personal Story

In my book SOAR, I share my personal introduction to the concept of energy:

I was having a conversation with someone and I distinctly remember him saying that everything is energy, even inanimate objects like paper or a pen.  My initial thought was that his comment was way out there. There’s no energy associated with inanimate objects, I thought to myself.  There are really just two categories of things in this world, living things such as people and animals and everything else.

Despite my doubt-filled thoughts, I was intrigued nonetheless and started to research the topic of energy almost immediately.  I’ve always had a curious mind, and whenever I would hear of an intriguing topic or concept that I hadn’t heard of before, I would research it until it quelled my curiosity.  Unbeknownst to me at the time, this was just the first domino to fall on an entirely new trajectory.

What I discovered was eye-opening, game-changing and energizing.  There was a small part of me that was somewhat disheartened when I thought about having lived for nearly four decades and was just then starting to discover how the Universe really works.  I had always thought there had to be a better, more empowered way to play this game of life, but just never knew what it was.  All I knew was that the old paradigm way of letting life direct my sails and doing my best to slalom around obstacles was not at all fulfilling or enjoyable and not at all how I wanted to continue living.

I started to research energy and vibration, and as I got further into my research, I wondered why no one talks about this stuff.  I mean, this is, in fact, how the Universe works and I felt like someone had just handed me the keys that unlock a door that had long been deadbolted.  What I learned was not subjective.  What I learned was not somebody’s opinion.  It had scientific underpinnings and I was determined to understand the underlying mechanics so I could learn how to use them to create my own reality.”

Ok, I realize you’re probably not an aspiring quantum physicist, but rest assured, neither am I.  Learning about this stuff was super fascinating though and helped completely change the lens through which I see the world.  Here’s my basic explanation from SOAR:

So here’s quantum physics in a nutshell, as I see it.  Think back to elementary school when we all learned about matter and its associated constituents.  Atoms are the building blocks for our entire Universe.  Subatomically, some tiny whizzing units of energy comprise an atom namely protons, neutrons and electrons.  Furthermore, most of an atom is empty space.  Everything in our world vibrates at a different frequency, and that is what gives rise to physical separatism.

Looking back, it’s a little preposterous to think that we are all briefly introduced to this concept early on in our schooling. However, the only ones who really take it beyond this point are people who decide to study physics.  It forms the foundation of the Universe and the tenets are incredibly powerful in creating our realities.  The issue is that most people are not aware of how our own vibration is broadcast into the world and therefore serves as a beacon for what we attract.

The Law of Attraction

This law states that “Like attracts like.”  The universe is playing a matching game every day, all day and will match you with things of like vibration.  This is why it is so important to embody positivity, love, and peace because that will be our point of attraction.

We will pick up on the law of attraction next week, but here’s what you can do this week:

What can you do this Week?

I’m excited to explore the laws of the universe further with you over the next few weeks.  Get ready to harness your true power by making these laws work in your favor.